The Lakota East women’s cross country team achieved something that no other Lakota East cross country team has ever accomplished before.  They stood on the OHSAA State Cross Country podium and were handed the team State Runner-Up trophy.  The highest placing Lakota East team, men or women, before that was 5th place.  What was even more impressive, is that they did it without putting a single runner on the top-20 individual podium.  This showed their amazing pack running ability, teamwork, and unity.  Beavercreek was the overall Division 1 team champions. 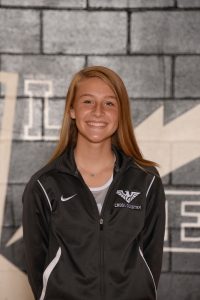 The head Hawk at the State Championships was junior Kelsi Harris, who placed 25th overall in the elite 183-runner Division 1 field.  This earned Kelsi All-Ohio honors for placing in the top 30.  Kelsi’s time for the 5k (3.1-mile) course at National Trail Raceway in Hebron, OH, was 18:45.7.  Right behind Kelsi was fellow junior Carly Spletzer, who also earned All-Ohio accolades, for her 28th place finish in a fantastic time of 18:49.1. 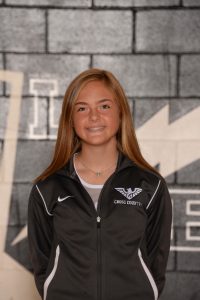 Senior Danielle Horter was the third Hawk across the line in 38th place, in a time of 19:04.0.  Freshman Jocelyn Willis was right on Danielle’s heels in 40th place, with a time of 19:06.5.  The fifth and final scorer for East was junior Paxton Oberhaus, who placed 46th overall in 19:08.8.  If you are doing the math, that is only a 23-second gap between the Thunderhawk’s 1-5 runners!  The sixth runner for East was senior Hailey Wilson, placing 73rd overall in a time of 19:30.6.  Sophomore Cali Reynolds rounded out the seven runners for the Hawks with her 113th place finish in a time of 19:57.0.

The Lakota East women will be competing in the Nike Cross Midwest Regional on November 16th in Terre Haute, Indiana.  The best teams from Indiana, Ohio, Illinois, Michigan, and Missouri will come together and compete for just 2 automatic qualifying spots to National Championships in Portland, Oregon.  Four national at-large bids are also available to the 3rd place finishers around the country.

Congratulations on an amazing State-run ladies!  And best of luck taking on the Nation in the future!