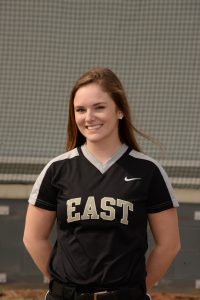 A four-year varsity starter, senior Sydney Larson has had an outstanding season for the Lakota East Thunderhawks. A pitcher who has played second base, third base and in the outfield, Sydney led her team to the 2019 GMC, sectional, district and regional championships, and an Ohio state runner-up finish. The Thunderhawks went 17-1 in league play and 30-2 over all.

In the circle, Sydney finished the season with a 20-2 record. Entering the state title game, she had 190 strikeouts in 136 innings pitched. She threw nine shutouts and had a no-hitter, a perfect game and had a miniscule 0.67 ERA. At the plate, she hit .482 with 28 RBI.

Entering this season, Sydney in the circle had 13 shutouts, a no-hitter, 316 career strikeouts and a 1.69 ERA. At the plate, she had a career .451 batting average.

Sydney has earned numerous honors, including this season being named 1st team all-state and for the third time 1st team all-GMC. She was also named GMC Pitcher of the Year.

She is a super student who is very active in community service. She plays for the Ohio Hawks 18u Gold Team and will play collegiately at Ohio University.

Her favorite athlete is Adrian Beltre, favorite book is Something Wicked This Way Comes, favorite movie is Guardians of the Galaxy and most-like-to-meet is Ray Bradbury.

COACH’S QUOTE – “Sydney is a phenomenal leader, and a great teammate. She is strong in the circle and reliable at the plate, batting .451 for her career. Sydney is smart, and inspires her teammates. She is a big reason why we did so well this season.”
— Steve Castner, Softball Coach